Getting onto the build, I didn’t have too many problems.   It was pretty straight forward and the heavier mountain bike specific tubing gives the welder a bit more freedom in the process.  The aggressively sloped and curved stays definitely were a challenge for mitering and for getting balanced.  I think I did a good job there, but it took a lot of time micro futsing and adjusting.   If you look carefully, you will notice the chain stays are as big as the bottom bracket.  This provided some interesting brazing to get that to fit together.   I have to say, I could have used the extra real estate a press in bottom bracket affords on this build. Due to the extreme forces on a mountain bike, I built up the joints a bit bigger than my other bikes.  Plus, it just looks right for a mountain bike.  You don’t want some wussy welds on your off road dominating frame.

I considered going single speed,  but I’m not quite into that concept yet.  As I mentioned,  the trails here are quite rocky, so I also wanted the largest tire diameter I could go for without getting into the 3 inch plus sizes.  I didn’t want to commit to the larger rim,  necessary yolk for chainring clearance,  etc.   I ended up going with the possibility of a double up front, while also using sliding dropouts so that I could go single speed in the future if I wanted.   I wanted a modern race bike,  so I used an oversized head tube that would accommodate a tapered 1 1/8 tapered to 1 1/2 inch fork using the semi integrated Chris King headset.   I also wanted a larger diameter seat post and went with the tubing that allowed a 31.6 mm post.  I considered press on BB 30 bottom bracket, however after talking with other builders it seemed there were issues that I didn’t want to deal with, as well as questions about any benefit.   I do like the look though and may go that direction in the future.   Steel is naturally compliant,  however with the trails around here it is nice to have some extra compliance.   So I really wanted some seat stays that were shaped to support my hefty rear while flexing enough to be kind in that support.   As you can see I even bent the seat stays upward as it attached to the seat tube to create a flex point at the top of the stays.   The last decision was cable routing.  I ended up going under the top tube and then over the seat stays.  I’m pretty pleased with the results.   I also don’t want zip ties all over the bike, so I used hydro guides that contained the cable without ties.  I considered going internal, however I have been annoyed by frame noise on other bikes.  However, this is another item I may reconsider in the future. 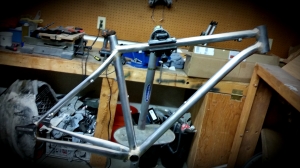